The Orange City Fire Department has always taken great pride in helping the community, whether it be saving a home from the devastation of a fire, being the calming voice through the wreckage of a car accident saying “We’re going to get you out of here”, or even a job as simple as providing water for a slip and slide event at Northwestern Colleges annual ‘Clash of the Classes’. But who does the OCFD go to when they need help? The answer is simple, YOU, the general public!

As you have probably read in previous articles, the expansion of the current fire station located at 202 Albany Ave SE is a much needed project. Trucks and equipment are getting bigger, available training space is inadequate, and more importantly, safety and health of the members of OCFD is a big concern. 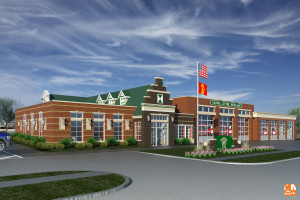 When the current station was finished in 1973, there were houses on both sides of the lot, and the members of the OCFD at that time planned the station to fit the space available. The location was centralized within the community to provide the best response for the citizens of Orange City.

Many avenues have been explored on how to address the present needs of the fire department. By expanding the current station, we can utilize the existing structure and the lot surrounding the fire station, while maintaining the central location and providing a building that fits the character of Orange City. The design of the new station meets the specifications of the Dutch front committee, providing a visual cornerstone for the community.

The projected total cost of the expansion project is $3.56 million. But how will this project be funded? The City of Orange City is looking for your help to vote on a Bond Issuance of $2.7 million. The City will contribute $700,000 and the OCFD will fundraise an additional $160,000.

A common question will be “What’s going to happen to my taxes if this bond issuance vote passes?” Let’s try and shed some light on this topic. It is projected that taxes will rise this Fall because of bond payments coming due for projects that the City of Orange City has now completed. Other bonds will be falling off the city debt. Taxes are projected to plateau once the fire station project is completed.

This bond issue needs to be voted on by you, the public. You have the opportunity to invest in public safety now, as well as in the future of Orange City.

Everyone is encouraged to stop by the fire station at our open house events on Saturday, February 20 from 9-11 AM, as well as Monday, February 22 from 5-7 pm to check things out for themselves. You can take a look around, listen in on the informational presentations that will be offered, and have your questions answered by members of the Orange City Fire Department.