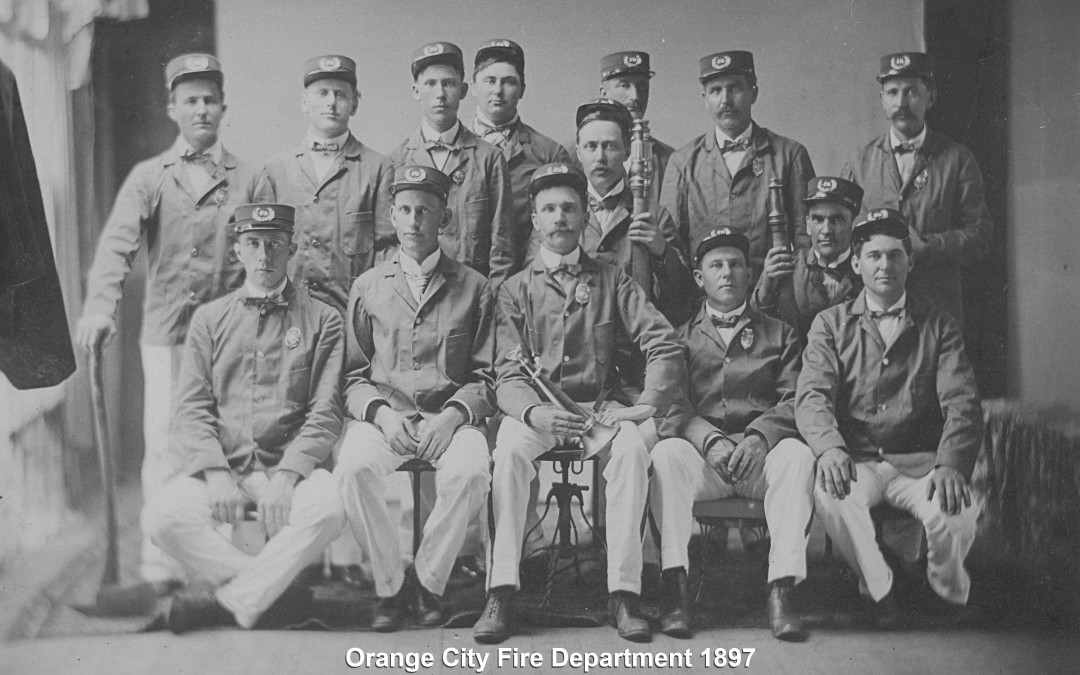 In 1897, 27 years after Orange City was founded, 17 men joined together and formed the Orange City Hook and Ladder Company.  Their first apparatus was a hand-pulled hose-cart, which was kept in the pump house by the old water tower next to City Hall. Even then, they were forward-looking:  photos show that by 1901 the department had a horse-drawn ladder wagon and had changed its name to the Orange City Volunteer Fire Department.  The first mechanized fire truck – a Reo – came to town in 1927. While this truck was red, there was a period in the 1940s-50s, when the apparatus were white.  After the OCFD bought another red engine in 1964, members painted the other vehicles to match it.

The American Reformed Church bell that originally summoned firefighters to a fire was replaced by a siren sometime in the early 20th century. When telephones became common, a continuous ring at home or work alerted firefighters.  A hospital nurse on the other end of the line gave the fire location before firefighters headed out.  In the 1980s, the fire department adopted a paging system that notified responders wherever they were.  Today they still carry pagers, but now also receive messages from the I Am Responding computer system on their cellphones.  This system allows them to indicate if they are en route, unavailable, or out of town so that when the chiefs arrive at the station they know whether they have enough firefighters on the way to handle the emergency.  If not, they can call immediately for mutual aid.

Firefighting has changed remarkably in the last 100 years.  Fire Departments respond to everything from car accidents to HazMat incidents, from house fires to field fires, from missing person searches to water rescue, from machinery entanglements to grain bin entrapments. And the list goes on. Hooks, axes, ladders, and hoses no longer suffice; the trucks carry thermal imaging cameras, Jaws of Life, large fans, compressors, an array of rescue equipment, and a portable air supply. The department has continued to upgrade its equipment ever since, most recently replacing the Rescue Unit, the Tanker-Tender, and the Aerial Ladder. 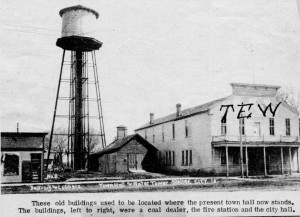 By the early 1970s, the department was outgrowing its three-vehicle building.  By the time the four-stall station on Albany opened in 1973, the OCFD had purchased a full-sized engine to meet the City’s growing needs.  The first aerial ladder truck with a 65-foot ladder arrived in the 1980s; after the 2008 Hawkeye Building fire it was replaced by unit with a 105-foot ladder. 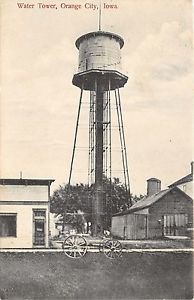 Over the years, Orange City and its fire department has been tested by several historic blazes, from a 1903 fire that destroyed three buildings on Main (now Central) and injured several firemen, to a massive fire at the Orange City Public School in 1948 which firefighters prevented from spreading to the nearby High School.  The old Vogel Paint building burned in 1964, sending up a dramatic pillar of black smoke and enticing a young Denny Vander Wel to ride his bike down to watch the firefighters at work.  Perhaps the smoke got in his blood that day.

No one is sure what, if anything, the original Hook and Ladder Company did for training. Over the years, as the demands on the department have grown, so has the need for specialized skills.  Fred Dykstra,  Rudy Grienke, and  Stan Van Otterloo were the first Orange City Firefighters to receive state certification in 1977. What was a 60 hour class for these men is now a 120 hour Firefighter I course required of all firefighters.  In addition, members complete at least 24 hours of state-mandated training every year in topics such as HazMat, CPR, Storm Watch, rescue operations, training burns, radio communications, driving apparatus, and other skills.  Most of Orange City’s firefighters are trained to the Firefighter II level and exceed the yearly training requirement.

Firefighters don’t have to pull equipment to the fire scene using their own muscle power any more.  They no longer answer to church bells or carry their bunker gear in the trunks of their cars. Instead of “eating smoke” as did yesterday’s firefighters, they carry air bottles on their backs– a necessary improvement given the toxins released in 21st century fires.  Hose cart races have been replaced by water-fights and more recently by the International Firefighter Challenge.  The 2016 regional Challenge will be held in Sioux Center this summer; the OCFD has a team in training.  Over the past 120 years, the Orange City Fire Department has built on the strengths inherited from previous generations of firefighters in order to meet new challenges.  Today’s members believe their current effort to expand and modernize the fire station honors that tradition.